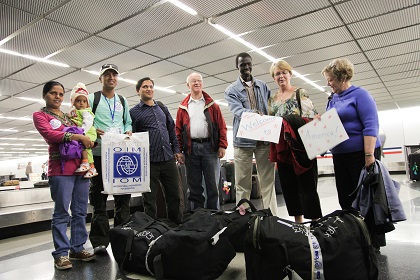 Yadu Kafely and his wife, Tika, were born and raised in Bhutan, a small landlocked country in South Asia. In the early 1990’s, thousands of ethnic Nepalese living in Bhutan were forced to leave the country and resettle in refugee camps throughout Nepal. Yadu and Tika were among those who fled. There, they were refugees for 18 years.

“Refugee life was a very poor life. We had no money to buy vegetables. Our house was made of bamboo and plastic. When it rained, all the water entered inside our house,” remembers Tika.

In May of 2010, Yadu and Tika left their refugee camp for the United States. Once they arrived in the U.S., they were welcomed by a team of individuals from Lutheran Church of the Ascension in Northfield, Ill., and the local refugee affiliate group, RefugeeOne. This was made possible, in part, by your gifts to ELCA World Hunger.

Although refugee life was hard, the Kafely family still faced a difficult road ahead. But with help from RefugeeOne, Lutheran Church of the Ascension and your gifts to ELCA World Hunger, they did not face the road alone.

In the months and years after their arrival, the family received English language training, employment assistance, food, transportation and more to ensure a fresh start. The Kafely family realizes that they could not have done this alone.

“I want to give a lot of thanks to the Lutheran church,” Yadu says. Your gifts to ELCA World Hunger help families, like the Kafleys, by supporting refugee resettlement organizations like RefugeeOne, Lutheran Immigration and Refugee Service and programs in nearly 60 countries around the world.