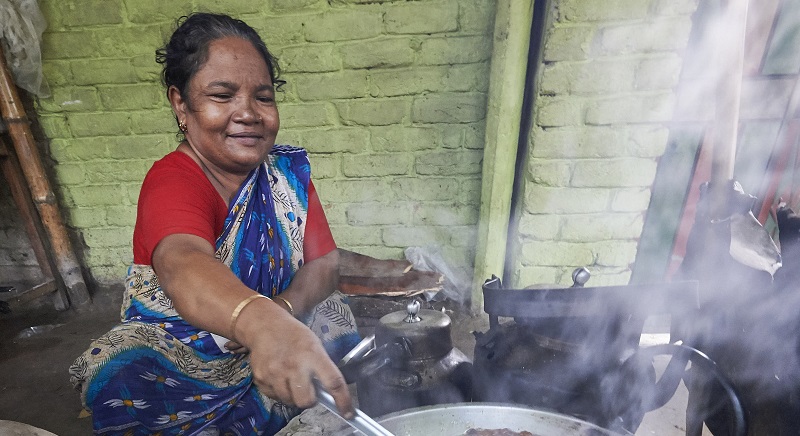 Interesting fact: Nearly 70 percent of rural families in India depend on agriculture for their livelihoods.

In rural communities across India, farming is the main source of food and income for many people. But because of drought and changing climate patterns, there is a lack of water for irrigation. The land is rocky and sandy, which causes soil erosion and shrinks the amount of land available for cultivating crops.

This combination has a detrimental effect on people's quality of life and access to food. Approximately 55 percent of the population of Chhindwara in Madhya Pradesh must migrate to other places for work, leaving behind their families for up to four months at a time. Children in Madhya Pradesh face one of the highest rates of malnutrition in the country at 60 percent, with 74.1 percent of children under the age of 5 suffering from anemia.

That's why ELCA World Hunger is partnering with our companions in India to support new food and agriculture projects that fight food insecurity.

Through your gifts, these programs will help our friends in India learn new skills that not only feed their families but also promote self-employment and income generating activities. Community members will learn to plan and implement actions for access to their rights, including basic services, while learning how to utilize natural resources in sustainable ways.

Your gifts will also help raise awareness about the importance of good nutrition for pregnant mothers and during the first 1,000 days of a child’s life. By establishing nutrition education programs and centers where mothers and pregnant women can receive quality food, children will receive nourishment that’s crucial for healthy development.

It starts with your support. Make a gift today and walk with our companions as we fight hunger in India.

Kanchan and her two sons live in the village of Mardwani near Madhya Pradesh, India. When her son Hritik became malnourished, she brought him to Padhar Hospital, whose Tripti Project, supported by your gifts, provided nutritious meals and health care to help him recover.


Your gifts will support these life-saving, life-changing programs of ELCA World Hunger in 2018. If funds raised for a specific program exceed the goal, the funds will be used to address a similar need in that country or region.

Find a Participant or Team:

The Evangelical Lutheran Church in America (ELCA) is a 501 (c)(3) non-profit organization. Your gifts are tax deductible as allowed by law. The ELCA’s tax identification number is 41-1568278.